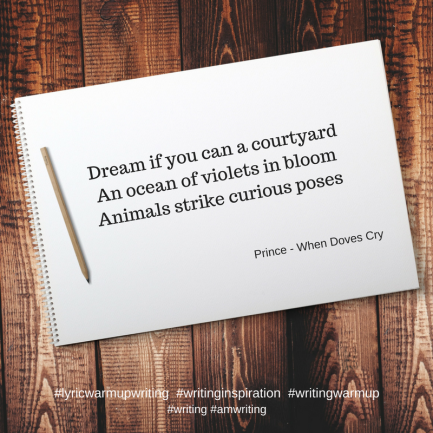 Thanks to my Mum for today’s lyric prompt. Always a favourite song of mine. And today it inspired me for a character I have missed writing a lot! If you’re inspired by the prompt, I’d love to read what you create.

Dream if you can

“Dream if you can a courtyard. An ocean of violets in bloom. Animals strike curious poses…”

“And you’re being crucified in the middle?”

“Says the psycho who has me tied to what I assume used to be your grandmother’s table. My father is not going to be pleased with this.”

“It is for your own good, Zena. Do you want these headaches to stop or not?”

“I’m pretty sure this whole bondage set up is more about you than me, Liam. I hardly need to be restrained for something I want.”

It was true that Zena wanted the pain in her head to stop, but it was also true that she had zero desire to remain in control of her father, Alexander or spend additional time with his sycophant, Liam.

Zena had been away on an assignment, and she had met someone on that assignment. Liam had been a completely possessive ass since. Liam had been obsessed with her for years, he was certain that he was meant to be her destiny, her husband, father of her children, the one she worshipped. Only Zena would rather take an acid bath than even entertain the notion. Especially now she’d met her sailor boy.

Dad and Liam had taken her from him, from her assignment. She had been incapacitated by the pain in her head and it was the only reason they’d gotten her back here and all restrained. Just thinking about it was making the pain flare in her head.

What was it about thinking about her sailor, about her life before her father claimed her, that made her head explode in such overwhelming pain?

“That is true. If you wanted this,” Liam said and he smirked.

It was that smirk that made Zena worry. She would not need to be restrained for something she wanted and that meant that what was about to happen would be something she did not want. With Liam involved this could mean two things. Either her father had given him instructions that she would not agree to, or Liam had his own sick games in mind.

Either way, he was a dead man.

Liam looked over as she began for the first time to strain against the restraints. “And so the penny drops, Zena. You won’t get free and this time we’re going to take your conditioning to the next level. There will be nothing left of that little girl who lived before and all thoughts of that imposter will be gone from your head. I am the brother that you will love and spend your life with.”

Zena was confused by Liam but that was hardly new. The man knew how to rant like a psychotic cartoon villain. Her confusion was secondary to a real fear. They had broken her before. Years of literal torture to make her the perfect little weapon for her father’s plans. They had not destroyed her soul, just twisted and smeared it with darkness.

Now it seemed Alexander wished to complete the job.

Zena knew one thing that they did not. They could try to break her but she could break herself further. She would rather die than go back to being the monster she now knew herself to be.

And even while she was restrained she could do that. She had nearly done it in the hotel room before they found her.

All she had to do was untwist her mind, her soul. Undo what they had done to her. It would destroy her mind and soul but death was better than this life.

In her mind, they smiled at her and she let go.

The pain was crippling and her heart couldn’t take it anymore.

Liam screamed as she died.

For the first time since she was sixteen years old, Zena knew peace.